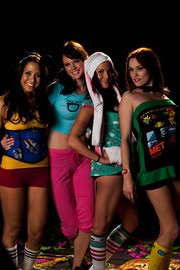 I posted a video of the Geek and Gamer Girls Song a few days ago on Total Fan Girl because I loved it the minute it blasted through the poor quality speakers on my laptop.  I only watched a little before I had to hit pause and demand that my husband stop what he was doing and watch it with me.  I think he was playing some game on his iPad and I may have made him lose but, hey, he’s a Gamer, he’ll get back to it eventually.  This video though, had to be watched immediately for the sheer awesomeness of the whole concept.  I played it a couple of times to hear all the words and catch all of Seth Green’s rap.  It was then stuck in my head for the next few days.  I can’t sing one verse of the song this spoof was based on (Katy Perry’s California Gurls) but I can belt out the spoof with ease.

In the days since Team Unicorn released this video, in addition to all the cries of “Awesome!” there have been a surprisingly large number of people crying foul.  The big reason?  The women in the video are sexy.  This is wrong.  This is horrible.  Somebody DO something!  It’s just awful that this spoof was made with such attractive women, they said, because not all women are that attractive and certainly not the women they were supposed to represent.  Everyone knows Real Gamer Girls and Real Geek Girls are all ugly trolls hiding in their basements, wishing they could find a boyfriend.  Okay, no one said that exactly, but if sexy women are such a huge misrepresentation, then reality must be the opposite, right? Wrong.

In “the real world” there is no one type of woman that plays games.  Some are sexy (have you checked out the cosplay at most cons?) but not all.  So, people asked, why wasn’t there a nice representation of that variety in the video?  Well, for one thing, the women who were behind the video and star in it happen to be Gamers and Geeks in real life.  That’s right, folks.  These sexy chicks could kick your butt in any number of games and rattle off Geeky quotes faster than the Comic Book Guy from the Simpsons.  They are real.  Enough of that line of questioning then, okay?  More importantly though, why did everyone get so angry?  I’m a woman and I wasn’t instantly offended.  The women are attractive.  So what?  Should they instead have found the most unattractive women possible and had them in the video, too or would that have been just as roundly criticised for calling all Gamers and Geeks ugly?  Probably.

This is a well-produced, fun, spot-on spoof. It makes so many wonderful references to Geek Culture that you really do have to listen more than once or look up the lyrics to fully appreciate them all.  It has sexy women.  It has Seth Green, Katee Sackhoff and Stan Lee! There are stormtoopers and comic books and the best spoof of the YMCA moves ever.  Why doesn’t everyone just take a step back and enjoy the video for what it is instead of what they think it should have been?  Sexy Gamer Girls FTW!

About Nicole Wakelin aka "Total Fan Girl" 11 Articles
Nicole began the Journey to Geekdom when her parents gave her a Pong Console for a birthday present. This was followed by countless viewings of Classic Star Trek and Creature Double Feature with her Dad. There was no turning back. She is an avid reader of anything sci-fi or supernatural and is especially fond of butt-kicking heroines with customized weapons hidden up the sleeves of their leather jackets. If you see her in her own leather jacket, avoid making her angry by remembering that Han shot first, Starbuck is a guy, and vampires do not sparkle. You’ve been warned. Nicole hosts the Total Fan Girl segment of the biweekly gaming podcast, The D6 Generation, and blogs at http://www.totalfangirl.com.