Wow. Unfortunately, not a good Wow. It’s a “wow, I expected so much more from a season finale.” It’s a “wow, I thought it would at least be as good as the other five episodes.” It’s a “wow, at least I won’t be pining for it while it’s away until NEXT OCTOBER.” It’s a “wow, if they’re going to do a scene that’s reminiscent of LOST, did it have to be my least favorite scene of the entire series?”

The best scenes from this episode were the first and last, and they were both action scenes. Action scenes should not, in my view, be the best scenes of this show, because in my mind that’s not writing, that’s directing. One of the worst conversations comes almost directly after the opening:

Jenner: “Anybody infected?”
Rick: “One of our group was; he didn’t make it.”

So the answer is no, right? Isn’t that what you’d want to say? And what about Amy? She was infected, and didn’t make it.

Jenner: “Why are you here, what do you want?”
Rick: “A chance”
Jenner: “That’s asking an awful lot these days.”

Oh my God, really?
AND THEN Jenner lets them in but tells them “once this door closes it stays closed.” HEY JENNER, WOULDN’T THIS BE A GOOD TIME TO TELL THEM THAT THE PLACE IS GOING TO EXPLODE IN THE NEXT DAY OR SO? SO MAYBE THEY MIGHT WANT TO RETHINK THE WHOLE “LETS GO IN” THING?

Every episode feels like it was written by someone different, but they were each brilliant. Except for this one, which felt like it was written by, well let’s just call him “less gifted” than the other writers. According to IMdB, Frank Darabont, who developed the series, wrote the first two episodes by himself, and co-wrote the third and sixth episodes with different writers each time. The author of the graphic novels, Robert Kirkman, wrote the fourth episode, and Glen Mazzara wrote the fifth episode. Many rumors have been swirling around about the writing staff having been fired after completion of the first season, but this may not be true. What is true is that the season was exceptional, until this last episode.

I was going to write that it was “lovely symmetry” that gave us joyous hot water showers that directly mirrored the joyous hot water showers of the first episode. Upon reflection, however, it was lovely in the same way that matching up a pair of socks is lovely. Not exciting, nowhere near elegant, just… lovely. Even the music, which was, err, lovely, was similar to the music from the first episode. 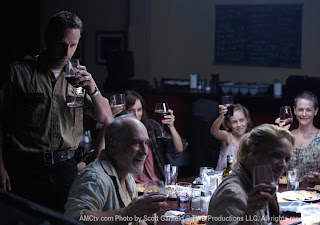 I did enjoy Bear McCreary’s music during the TS-19 scene; it was nicely science-y, then appropriately subtle and nearly memorial-service-like. And I did appreciate the information we received about the extent of understanding of the virus, and the global nature. “The French held out the longest” reminded me of Charlie’s line in the LOST pilot when they heard a French person’s voice on the radio. “The French! I love the French!”

The whole section starting with the survivors learning about the decontamination procedures, right up until the survivors were able to leave the room. was just as heavy-handed as the rest of the episode. Shane probably had the best idea when he tried shooting up the computers; why didn’t we hear more about why that wouldn’t work? Made sense to me. Dale’s talk with Andrea was, I’ll admit, nicely done, but that was the acting, not the writing; the lines were as they had been throughout the episode, heavy handed. Similarly, Jacqui staying behind was nicely done, but again, not because of the writing.

Did anyone else laugh out loud, as I did, when Carol pulled out the grenade? Here sheriff, I took THIS GRENADE out of your pants when I washed them, and put it IN MY HANDBAG in case we needed it later….

The explosion and resulting fire… was a thing of beauty. Honestly, it was gorgeous. I loved it. I would have included a photo in this review had one been available.

Then… the montage. I HATE MONTAGES. It is lazy writing, especially when accompanied, as this of course was, with a song with lyrics. They did it at the end of episode 3 of season 1 of LOST and it was my least favorite scene of the entire series. It ties things up with a neat little bow, a glimpse of each character, and is straight out of teenage fiction. This show deserved better. It deserved the lack of heart, mind, soul, zombies, and horror that the Series Finale of The Walking Dead left utterly lacking. I shall damn it with faint praise: it was okay, for a regular show. 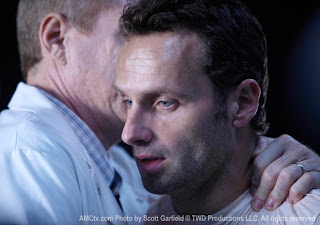 The one thing that might have redeemed this episode would have been a twist. “The Whisper” was not a twist. I’ve heard several different twist ideas, all of which were better than anything in this episode except for the hospital scene and the explosion. Someone suggested to me it would be cool to see, in the closing moments, a group of people in another country, totally unaffected. How sinister, ooo! A twist would have saved it.

Here’s a thought, though. If they had included a twist, people would have been talking about it and discussing the implications for a long time. The risk in that is when you have a fan base that tends towards the – no pun intended – rabid side, they have a tendency to take a twist and spin out elaborate storylines (for LOST they were called “answers”) that are far more complicated than would ever work on a 44 minute episode or even an entire season on television. AHA, THAT’S IT! The show-runners for The Walking Dead have cleverly avoided disappointing their fanbase with the next season by giving them NOTHING to work with in the intervening 10 months! So sorry for the snarky review; well done, you!

I don’t have a favorite line from the episode, but I do have a least favorite line: “My daughter doesn’t deserve to die like this.” Because being EATEN BY ZOMBIES is so much better.