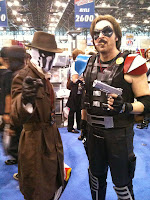 Let me admit up front that although I like Comics, I do not consider myself a Collector.  I buy them randomly as the mood strikes.  The last one I purchased was The Guild comic and it came with two different covers.  I did not buy both.  I know, I know, but letting my daughter pick out the one that she liked best was far more satisfying for me than having both in my meager collection.  Like I said, not a true collector.  As a result, I found that the comics were the least interesting part of my weekend at NYCC.  Now, before you start throwing rotten veggies at me for such heresy, you should know I will hold up a comic as a shield and you risk defiling it’s pages, so put down the tomatoes. There, much better.

Even not being a Comic person, this was an impressive Con.  There were boxes and boxes full of plastic-sleeved treasures for the hardcore collectors to peruse.  Artists were there, too, lots of them, signing their work and anything else you had for them to personalize.  There were even some artists creating custom skateboards with their characters on the spot, which was just amazing to watch.  These guys have more talent in their pinkies than I possess in my whole body. And despite the crowds, the majority of these artists were very accessible.  Even the big names who had lines were still there, talking to fans and signing away.  If you were willing to wait a bit, you got your chance.  While you were waiting in line you could always people watch, and were there ever people worth watching.

The Cosplay at NYCC was incredible and it was one of my favorite parts of the weekend.  There were superheroes, villains, video game characters, anime characters with crazy pink hair and everything in between.  And these weren’t costumes pulled from the shelf at the local Halloween shop.  These costumes were hand-done labors of love with attention to the smallest of details.  There was a group of attendees dressed as Luke, Leia, Han and Anakin and even their hair, their Real hair, was absolutely perfect.  Now that’s commitment.  The only problem with all these tricked out costumes was the risk of losing an eye to a wayward weapon, but that was a small price to pay.

There were even booths that were not comic related at all.  I visited the Xbox Kinect booth and now can’t wait to have one of these in my living room.  I flailed my arms and jumped up and down in an effort to steer my little raft in the right direction and didn’t even care about the crowd watching because it was just that much fun.  You could also get up on a stage complete with lights and smoke and try out The Michael JacksonExperience.  Just imagine a bunch of Geeks trying to dance like him, complete with moon walk and crotch grabs, and, oh yeah, dress them up like The Joker and Batman.  Priceless.  So, if you didn’t get to New York Comic Con this year because you thought it was just about comics, think again.  And get your badge for next year before they’re gone!

About Nicole Wakelin aka "Total Fan Girl" 11 Articles
Nicole began the Journey to Geekdom when her parents gave her a Pong Console for a birthday present. This was followed by countless viewings of Classic Star Trek and Creature Double Feature with her Dad. There was no turning back. She is an avid reader of anything sci-fi or supernatural and is especially fond of butt-kicking heroines with customized weapons hidden up the sleeves of their leather jackets. If you see her in her own leather jacket, avoid making her angry by remembering that Han shot first, Starbuck is a guy, and vampires do not sparkle. You’ve been warned. Nicole hosts the Total Fan Girl segment of the biweekly gaming podcast, The D6 Generation, and blogs at http://www.totalfangirl.com.